Owning a Great Dane isn’t for the faint of heart. They require a lot of room, a lot of food and a lot of understanding. They don’t mean to be so big, but there’s not anything they can do about it. Maybe it’s their exuberance when they’re in the clumsy puppy stage, but many Great Danes are often deemed to be “hyper.” But is that really true?

Are Great Danes Hyper? Great Danes are not hyper. In fact, they are anything but hyper. Like all dog breeds, they will have periods of excess energy as puppies, but this quickly resides once they reach adulthood. Most need minimal exercise and are quite content to relax around the house with you.

It’s good that those claims are unfounded, because who needs a 175-pound dog that’s overly active and bouncing off the walls (literally)? But even with his steady, calm temperament, the Great Dane poses many challenges for his owner, and clearly, some people just aren’t cut out to be Great Dane owners.

Statuesque and unruffled, the Great Dane embodies the qualities that lesser dog breeds can only hope for. He’s gentle with children yet protective of them, slow to bark, but when he does, he means business and is as dependable as he is large. The Great Dane is content to lounge on the rug by the fireplace or patrol a backyard.

While the Great Dane has a calm, respectful demeanor, that’s not to say that he’s lethargic – far from it. Great Danes crave interaction with their humans, and generally, if they do exhibit signs of hyperactivity or angst, it can be attributed to a sparsity of time spent with their owners. They do not handle loneliness well.

Owning a Great Dane isn’t difficult. But it is demanding. As loving and as gentle as he might be, he is still one of the largest dog breeds in the world, and it requires a commitment from his owner to ensure that he won’t be allowed to become a problem child.

Even with all of these fantastic traits, there are bound to be times when your Great Dane needs to burn off some excess energy. And frankly, who can blame them? We all get a little stir crazy every now and then!

As simple as it sounds, one of the best ways to burn off your dog’s excess energy is to simply take them on walks!

Long, casual, leashed walks are a fantastic way to burn off energy without placing undue stress on their large bodies. This style of low-intensity exercise is fantastic for giving them both a mental and physical break.

In addition to being a great way to release energy, long walks are also a great way for you and your dog to bond as well. The leash will force each of you to respect the other’s pace and occasional breaks to stop and smell the roses (or other dog’s poop) at times 😉

In addition to physical exercise, finding ways to mentally stimulate your dog is another great way to relieve their pent-up energy. From puzzle toys to training sessions, these are just a few of the ways to wear them out. Consider this the wholistic “sound mind sound body” approach for your dog!

There’s something about a large, lumbering canine rushing to greet his owner at the end of a day’s work that warms the heart and makes the tribulations of the day melt away. Great Danes love to please, and love to make the day better for their owners.

But all dogs are different, and not all dogs follow the trend for their particular breed. For Great Danes, early training is of utmost importance, because a misbehaving Great Dane can do more damage than a misbehaving chihuahua.

An early start is key, and fortunately, Great Danes are capable of early starts. The breed is highly intelligent, and it shows in puppies. They can easily learn simple commands, which has benefits that go way beyond the commands themselves.

All dog training is a matter of principles building upon previously learned principles, and Great Danes “get it” quicker than many breeds.

For both the dog’s sake and yours, keep the training sessions short. In the early stages, eight to 10 minutes should be considered the maximum.

As the dog enters adolescence, you might be able to extend the training session to a small degree, but never more than 12 minutes.

Consistency is also very important. Keeping training rituals short is a good way to keep them consistent. If you get bored with them, the dog is already there, in many cases. The fact that dogs respond well to praise is well-known, and this is even more apparent in Great Danes.

Some days, it will become apparent that the dog just isn’t into it. Don’t force it. Don’t take the “I’m in charge, not you” attitude, because it won’t matter to the dog.

So, if Bowser shows up for a training class without his homework, don’t stress about it. It won’t help. Give him the day off.

Great Danes are particularly keen on treat rewards. Once they learn – and they generally do so quickly – that doing this results in getting that (a treat), they’ll be more than eager to repeat the task.

Again, consistency is vital. Don’t give your dog a treat for nothing. Only reward him for doing what you ask him to do. By the same token, don’t withhold a treat – or at least a hardy attaboy  – when he performs the task.

There will, of course, come a time when you will want your Great Dane to respond to a command without the expectation of a treat. You can vary the reward from an actual doggie treat to verbal praise, but make sure he gets some positive feedback every time.

Only Say it Once

Many dog owners make the mistake of repeating the commands when the dog doesn’t do the right thing.

If, say, you set the dog on the sidewalk and walk away, telling the dog to “stay,” and he gets up and follows you anyway, don’t repeat the “stay” command. Start the entire process over from the beginning.

Otherwise, the dog will learn that he doesn’t have to comply until he’s heard the command several times.

Dogs will associate training rituals with the place they’re conducted in and will assume that it only applies when he and his owner are in that place.

So, every once in a while, take the dog to the park, or for a neighborhood walk and perform the training ritual in a new venue.

You should be as firm in your admonishment as you are giddy in your praise. When your dog misbehaves, your critique should be harsh and unpleasant – not necessarily loud and demeaning.

Change the tone of your voice, add some “gravel” to it, extend your vowels, and make eye contact with your dog to make sure he understands that he messed up.

Do not, however, use this tone when he fails to respond correctly during training. That is something entirely different.

Here, a neutral tone will be the most effective. Use the neutral tone until he gets it right and then let the praises flow!

Patience is a Good Thing

We’ve already established that Great Danes are calm and easy-going. Those characteristics are manifest in different ways, depending on the dog and its environment.

Great Danes thrive on their relationship with their owners. They are not particularly independent, and their whole world revolves around their humans.

If they don’t get the love and affection they crave, they become more likely to develop behavioral adjustments, and those adjustments will probably be undesirable.

Playfulness would be the closest thing to the hyperactivity they are often accused of possessing. A Great Dane loves to play, but it’s not from an overabundance of stored-up energy.

It’s more of a joyful interaction with the human family that he loves so dearly. This is why the Great Dane is so well suited to families with children. 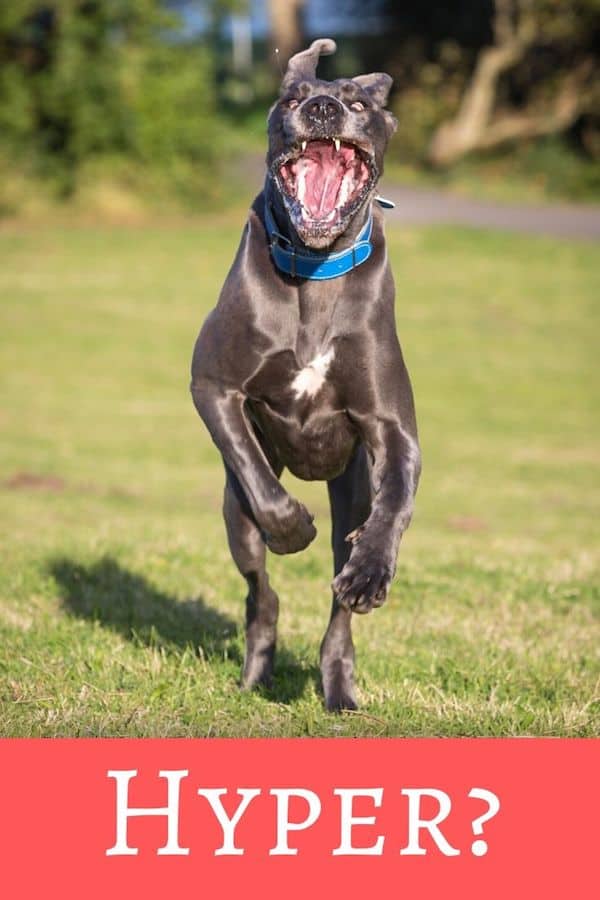 1 thought on “Are Great Danes Hyper?”