Invisible fences are a viable option for ensuring that your Great Dane remains safely in your yard. Most Great Danes take 1-2 months to be fully trained with an invisible fence system.

While invisible fences are a viable option for ensuring that your Great Dane stays on your property, there are some downsides to them that also need to be considered as well.

The Case For and Against Invisible Fences for Great Danes

To make sure that we’re on the same page, I’d like to point out that in this article I’m referring to an invisible fence as the electric variety that is buried underground. I am not referring to the above-ground electric fences that are commonly found on farms and ranches.

The first photo below has flags indicating where the invisible fence is buried underground. Whereas you can clearly see a more traditional above-ground electric fence in the second.

While an above-ground electric fence can certainly still work, they’re not always the most attractive option making them less than ideal for most homeowners. Lucky for us, our canine friends are more than smart enough to learn how to abide by these invisible boundaries!

With that out of the way, let’s jump in to take a look at both the pros and cons of invisible fences for Great Danes. I consider myself a glass half full type of person, so let’s kick things off by starting with the pros first 😉

For those with moderate to large yards, it may be cost-prohibitive to install a physical fence around the entirety of your property. While invisible fences have their costs as well, they are typically a fraction of a physical fence due to requiring fewer materials and installation time.

They are also able to cover surprisingly large amounts of land! While I’ve never seen a calculation of the theoretical maximum amount, there are several products on the market that cover up to 100 acres.

Even if you have more land than this, surely 100 acres is enough land for even a Great Dane to roam!

In addition to invisible fences potentially saving you money, they also create more leeway when it comes to restrictive design guidelines. Many communities have strict guidelines around the type and style of fencing allowed.

If these guidelines don’t meet your own personal taste, it could potentially force you to install something that you simply don’t like looking at day in and day out!

Thankfully, because invisible fences are installed below ground, there’s nothing to see that would ruin the desired look of your property or conflict with design guidelines.

Keep in mind that if you were looking to construct a physical fence that’s strong and tall enough to prevent a determined Great Dane from escaping that it would need to be a huge fence! Not only that would that be expensive, but it could also block scenic views to be had on the property.

Some may argue that such a fends adds a great degree of privacy, but if that’s a primary interest then you probably weren’t considering an invisible fence in the first place!

Thankfully for us, the vast majority of Great Danes aren’t the fence-jumping variety. While they certainly don’t lack the athleticism, most simply don’t see a need to escape their home. To learn more about Great Danes jumping fences, you can take a look at our article here.

Now that we’ve reviewed some of the benefits of invisible fences for Great Danes, let’s also take a look at some of their potential downsides as well.

First and foremost, it goes without saying that an invisible fence requires electricity to function. In the event of a storm or other event that knocks out the power in your home, your invisible fence is effectively down!

While your Great Dane may not realize the moment the fence is “down”, there is the possibility that they could escape during an outage. Sure, some people may have generators for this reason, but the truth is most of us do not.

The more likely power outage scenario is the dog collar battery dying. If it’s not functioning because someone forgot to charge the collar (or someone forgets to put it on Scooby), then the invisible fence does you no good!

Physical fences clearly do have an advantage here because they don’t run on electricity or require charging. Sure, there will be some occasional maintenance, but it’s minimal in most cases.

In addition to not requiring a battery, physical fences have another extremely distinct advantage over invisible fences in that they not only keep your dog in, but they also keep other animals out of your yard!

This is of particular important if you’re dealing with a female Great Dane in heat. Wishful male suitors will come from miles around to seek out a female dog in heat, and while she may be respectful of the invisible fence boundaries, I can assure you that they won’t!

While heats are a less frequent scenario, it does bring up a good point about providing a physical barrier keeping your dog in and other animals out of your yard. From protecting gardens and shrubs, to preventing unwanted dogs from bothering your Great Dane, this is certainly an advantage of a physical fence.

In addition to these issues, it’s also worth keeping in mind that training is required with invisible fences. Unless you speak Dane and can simply tell them to not walk outside of the yard, then it’s going to take some time to figure things out.

You also wouldn’t need a fence at all if that was the case!

Last but not least, I should mention the potential ethical side of things. Many people will not feel comfortable installing an invisible fence because it does rely on delivering a shock as feedback.

While the shock power can be dialed up and down, it’s something that you’ll need to make a personal decision on before moving ahead with an invisible fence for your Great Dane.

How Much Do Invisible Fences Cost?

As with many things, the cost can vary!

The larger your yard, or area that you want to enclose, then the more wire and installation time is required. As you can guess, this will drive up the cost!

Want to avoid getting your hands dirty and pay a pro to do it? Well, that will cost you more as well.

According to PetPlaygrounds.com, the average installation costs between $950 – $1,500.

While that’s certainly not cheap, it is far cheaper than the installation of a physical fence. A good-looking wooden fence could easily run in the ballpark of $5,000 – $15,000.

The good news for you is that if you’re not afraid to go DIY you can save a TON of money! There are several good kits that can be found for a couple hundred dollars that will provide you with the exact same functionality at a fraction of the cost.

How Do Invisible Fences Work?

Invisible fences work by burying a metal wire 3-4 inches underground around the desired perimeter or your yard or property. This wire is buried in a complete loop to create an enclosed area to contain your Great Dane.

The wire is connected to a power source such that it is charged and emits energy to create a “boundary”. A receiver is attached to the dog’s collar that can sense when it gets close to the boundary line.

Most receivers have the option of either beeping or vibrating as they approach the boundary edge to warn the dog that they are getting too close. If your Great Dane gets too close to the boundary, the collar will provide a small shock to their neck for correction.

The amount of shock can be adjusted upwards or downwards, and often comes with a recommendation from the manufacturer. When used and configured correctly, the shock should not be painful.

Instead, it should be an irritation that provides immediate feedback to your Great Dane that they have gone too far, and need to turn around.

How Long Will It Take For My Dog to Learn the Invisible Fence?

Most Great Danes will take 1-2 months to be fully trained with the invisible fence. Training takes the form of teaching them where their new boundaries for the yard will be.

This is done by placing a series of small flags that follow the path of the line buried underground. These flags are placed immediately after installation, typically around every 5 feet to begin with.

This provides enough flag coverage to give your Great Dane a good visual indicator of where the fence line is. As your dog begins to learn their new boundaries, you will slowly start the process of removing flags.

Each week will remove a few more until finally there are none left! 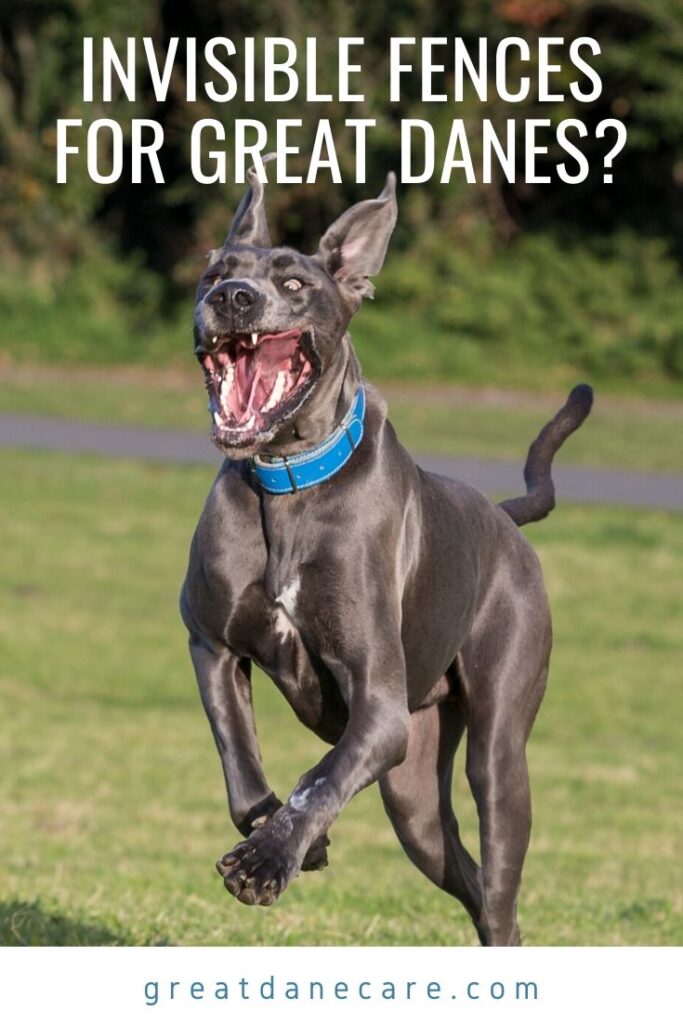 We are a participant in the Amazon Services LLC Associates Program, an affiliate advertising program designed to provide a means for sites to earn advertising fees by advertising and linking to Amazon.com and affiliated sites. We also participate in other affiliate programs and are compensated for referring traffic and business to these companies.