Great Danes get along famously with people, as hundreds of hilarious online photos would testify to. However, many people often wonder how well Great Danes get along with other dogs. Their size and strength make some dog owners afraid to add them to a multi-dog household.

If a Great Dane usually gets along well with other dogs, what are common triggers that could lead to aggression?

Read on to find out more about how Great Danes interact with other dogs, and how you can help them assimilate peacefully into a multi-dog household or act friendly towards other dogs on the street.

Great Danes Usually Get Along Great with Other Dogs

The good news is that Great Danes normally have a good reputation for being friendly with other breeds. This is true regardless of the size of the other dog.

In most cases, it’s more likely that a Great Dane might accidentally injure another dog in play than to do so purposefully. Most Danes simply don’t recognize their size and strength, which sometimes may result in these types of accidents. They are generally very affectionate and playful giants.

Despite being a little clumsy in their huge bodies, Great Danes are gentle in nature and can often be trusted even around very small and fragile animals like these baby chicks.

It seems as though Great Danes know they are larger than other animals and go out of their way not to accidentally hurt them!

Because they usually have a laid-back or playful personality and don’t tend to be high-strung, Great Danes usually enjoy popularity with other dogs in a household.

They often even find themselves as the favorite of much smaller dogs in the household!

Some Great Danes Are Stranger Aggressive

Despite their friendly nature with other dogs in the household with them, some Great Danes can be reactive or aggressive towards strangers when they enter their home turf.

This can include the following kinds of people:

The reason that Great Danes can be aggressive towards strangers coming into their home territory is that they were originally bred to act as guard dogs for large country estates.

When strangers would come onto a country estate, these dogs would greet them at the gate and bark loudly to let the owners know that someone was on the property.

For many Great Danes, this authoritative barking is the extent of their aggression towards strangers until their owners intervene.

They are bred to be more of a deterrent than an attack dog, so true aggression in the breed is rare.

Great Danes can be very protective of their owners, and walking on a leash, this protective nature can manifest as barking or other dominant aggressive behavior towards other strange dogs and their owners on the street.

While this protective streak is a natural inclination of the breed, it is deepened and sometimes made worse by lack of proper socialization as a puppy.

For puppies that are kept at home a lot and are not exposed to outside stimuli like strangers at a young age, they will find sights and smells they are not familiar with overly threatening and will react accordingly.

One problem when walking a Great Dane is that other more reactive dogs will often show leash aggression first, causing the Great Dane to act aggressively in response to protect its owner.

But because of their large size, aggression in Great Danes is a serious problem that needs to be addressed before it escalates into a dangerous situation.

Reasons Great Danes Can Be Aggressive Towards Other Dogs

Other than territoriality and leash aggression, there are other reasons that Great Danes can have problems getting along with other dogs.

While Great Danes are generally a non-aggressive breed, aggressive individuals can arise in any breed as the result of poor training or genetics.

Here are some other forms of aggression that sometimes crop up in Great Danes:

If these forms of aggression show up, the dog should undergo intensive training to address the problem and attempt to reduce aggressive triggers and responses.

Even though it is rare, when large dogs like Great Danes are aggressive towards smaller dogs, it can be a very dangerous situation for the other dog.

Since Great Danes are naturally friendly dogs that tend to get along with other dogs more often than not.

The best way to avoid them showing aggression towards other dogs is to show them early that being around other dogs is a positive experience.

Here are some ways you can make sure that your Great Dane is as dog-friendly as possible:

When it comes to making sure a Great Dane does not show aggression towards other dogs, the most important thing to address is socialization.

Aggression can arise from a number of issues. But the most common one is a lack of familiarity with other dogs and how to interact with them. This is especially a problem for Great Danes that are raised in a single dog household.

For Great Danes that are gentle and trusting towards both canine housemates and strange they meet, consistent socialization and sensory exposure is key to make sure that the dog’s formative experiences with other dogs and unknown situations are happy ones.

In addition to getting along with other dogs, you may also wonder how Great Danes get along with cats. 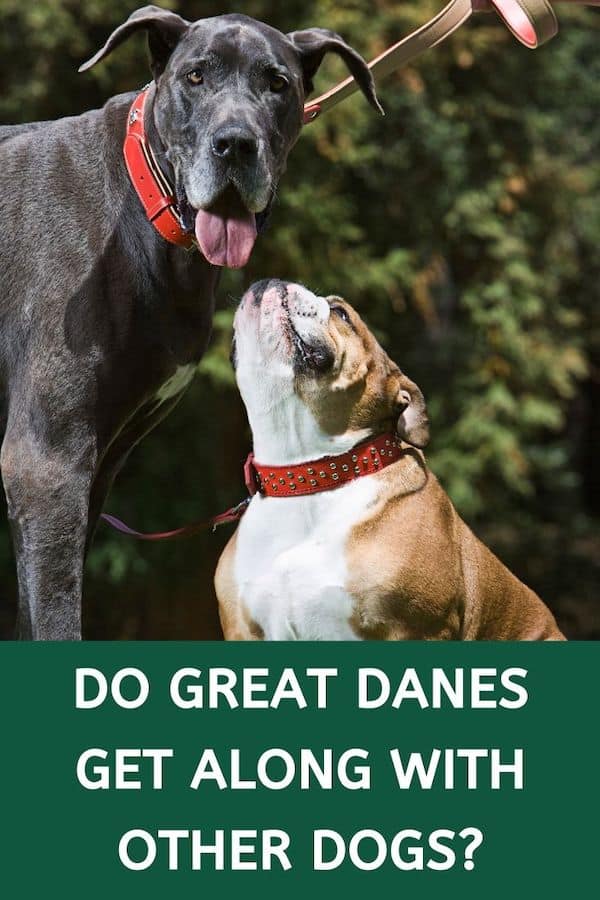 6 thoughts on “Do Great Danes Get Along With Other Dogs?”