Getting a new puppy is always an exciting time for any family. Great Danes are one of the most popular breeds in the United States, and their puppies are sought after by many. In order to have a healthy puppy, when should a Great Dane leave its mother?

If you are considering getting a Great Dane puppy, then there are a few reasons why your breeder or rescue center may hold your puppy until they are old enough. Knowing these reasons is the first step to giving your new addition an amazing life!

When Can Great Dane Puppies Leave Their Mother?

If you have ever picked up a new puppy, then you know how thrilling the process is. They become part of your family, and you truly only want the best for them.

According to the AKC, Great Danes are the 14th most popular breed of dogs in the United States alone. This makes them a very popular puppy for families, and one of the biggest puppies as well!

Most breeders or rescue centers will not release your new Great Dane puppy until they are at least between the ages of eight and twelve. When a puppy is growing up around their family, they learn a variety of social skills and behavioral traits that they would not be able to learn otherwise if they were on their own.

Some of these behavior traits include learning not to bite, reading body language, how to play with other animals, and many other skills that you as a new puppy parent cannot teach your new Great Dane.

If you are living in the United States, it is actually illegal for a breeder to allow you to take any puppy away from the mother before the age of eight weeks.

Having someone who will allow you to take the dog at an early age should be a red flag about the health of the puppy or the person themselves.

If your breeder is knowledgeable about the dog breed they are raising, they should know how important those few weeks can be.

What Happens to A Puppy Between the Ages of Eight and Twelve Weeks?

Eight to twelve weeks is the prime time for a puppy to head out to a new family. Their need to be surrounded by siblings and their mother is not as intense as it was prior, and they are also able to accept a new mother figure into their life.

They also can begin having more interactions with adults and children. Another basic need that a Great Dane puppy has is the need for love and security from the humans in their life. This is a high socialization time for puppies.

In terms of where your Great Dane puppy is mentally, their brain waves are starting to kick in, and they can even begin to be recorded. They are also able to begin to form relationships with other humans as well as other dogs, which is a great bond for providing the security and love that your puppy needs.

They also are able to learn how to be independent, and even can begin understanding slight discipline. They are already aware of how to respond to certain voices, and can even recognize people.

While you may not be training your Great Dane puppy anytime soon, there are certain skills that you can help them learn. Puppies between the ages of eight and twelve weeks can begin to learn simple commands such as come, sit, stay, and no.

They are learning that certain actions are associated with rewards or punishments as well. Housebreaking and games are frequently started during this period as well.

What Happens If You Take a Puppy Away Too Soon?

While it may not seem like a big deal to most people, there are a lot of negative aspects to taking your puppy away from the mother too soon.

Puppies who are removed from their litter too early tend to be more anxious than others. This can result in barking, biting, and the unwillingness to listen.

These behaviors can also result in resistant to learning or bonding with the owner, and aggression may show up in the future too. This is mainly due to the puppy not understanding companionship and bonding, which is taught by the mother and litter.

Further complications can even result in your new Great Dane puppy being unwilling to eat, which can cause dietary issues, increased distress, and higher mortality rates.

If you have ever had a puppy with severe separation anxiety, this is a common side effect of being taken from the mother too early.

They have not learned to bond with others and are not able to become independent when the owners are not around.

What Can You Do If Your Great Dane Was Taken Too Early?

The good news is that even if your puppy was taken from their mother too early, there are still ways that you can train your puppy.

While it is not the same quality of training, they would have received from their mother, at the end of the day it is better than nothing!

If you are looking to use a trainer, then make sure they have experience with training young dogs and have them meet your new puppy to see if they get along. If you are able to spend the time with your dog, then you can also train it yourself.

Your new puppy needs someone who they can look up to as a mother figure. Not only is this providing them with the security and love they need at a young age, but you also are responsible for teaching the dog respect.

Establishing your authority in the relationship you have with your puppy is essential. Once you have your Great Dane’s respect, you will be able to begin training them to follow basic commands.

Here is the Good News

Even if your pet leaves the litter a little too early, you can still have a great pet! It will require more effort from you as a pet owner to ensure that your pet is learning the behaviors that it has missed out on.

Great Dane puppies are one of the easier animals to train, and they get along with other pets and humans if they have a bond with a mother figure in their life.

That being said, a mother figure does not have to be a woman; it just needs to be a parent type individual.

Great Danes may be a large breed, but they are gentle giants. They are a breed that thrives on companionship, and they need your help to gain the confidence and mild temperament that they are known for.

Once you have made sure the puppy is healthy, you can look forward to a long and happy life. 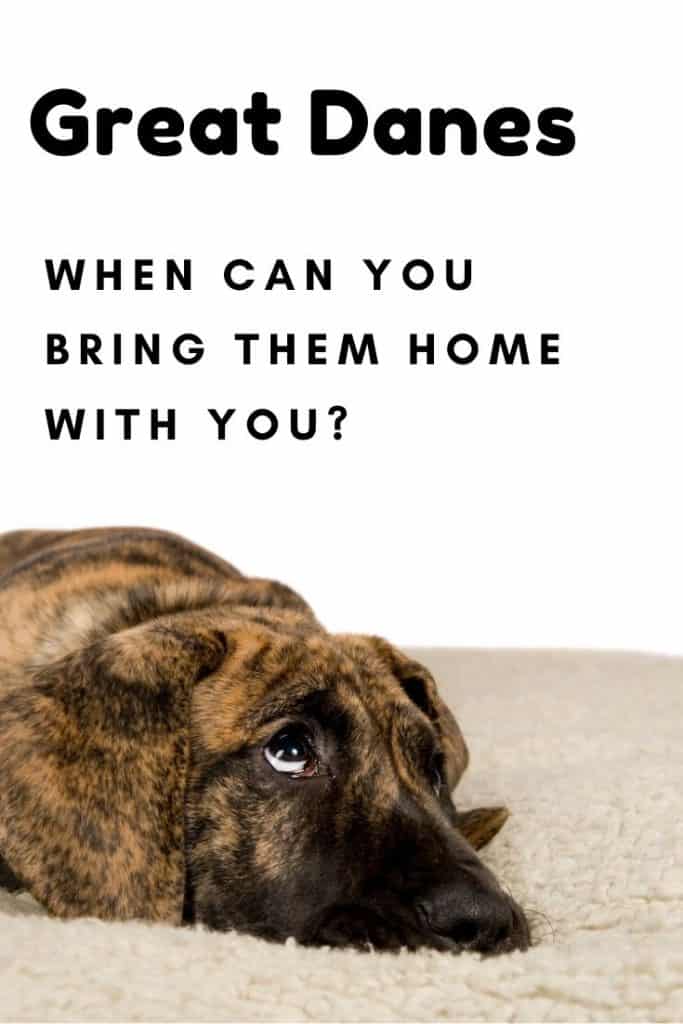 1 thought on “When Can Great Dane Puppies Leave Their Mother?”