If you have the space to offer them a comfortable home and the budget to afford all of the dog food, Great Danes make excellent pets. They are gentle giants who are extremely loyal. Some exhibit the calm nobility you would expect from the “Apollo of dogs.”

Others are as goofy as Marmaduke or Scooby-Doo. But all Danes get huge, so good behavior is extremely important.

Despite their large size, teaching a Great Dane to not jump up requires a similar approach to that of smaller breeds. Focusing on removing the reward of attention is one the most important steps.

If you’ve raised dogs before, you know how quickly cute puppy shenanigans can become problematic behaviors when a dog is full-grown. All you have to do to realize the importance of training a Great Dane is remember that, in their case, full-grown is over 100 lbs.

A Dane puppy that learns to jump will soon be an adult dog who is taller than you and loves to jump as well!

Keys to Stopping Your Great Dane from Jumping Up

Great Danes love attention and affection. Any behavior that you reinforce with attention is one that they’ll learn to use to get what they want.

When a dog stands over six-feet tall on its hind legs, jumping up on humans to get attention can easily result in unhappy house guests in the best case or a trip to the emergency room in worst-case scenarios.

Whether you bring home a puppy or adopt an older dog, the key is to start training them to not jump immediately. Puppies haven’t developed the bad behavior yet, so you don’t have to break them of it. They may have a little hyper energy, but it’s not something that can’t be handled.

Older dogs may have developed jumping behavior in their previous home, but the change of environment will make it easier to break them of old, bad habits.

In addition to starting early, it’s important to present a unified front. Every member of the household has to commit to discouraging the jumping behavior in order to make the training effective.

If one member of the family rewards bad behavior, it can undo the work of everyone else in the house.

If you never reward jumping, then the dog won’t have any reason to continue the behavior once you’ve told it to stop.

Unless you’ve made the mistake of rewarding jumping behavior with food, treats, or toys—the reward that you’re Great Dane is most likely seeking when they jump up is attention and affection from you.

It’s important to remember that even negative attention can still be seen as getting what they were after from your dog’s perspective.

The best thing that you can do to discourage jumping is to withhold attention and affection whenever they jump. The sooner that they learn that they won’t get what they’re after, the sooner that they’ll learn to avoid the behavior altogether.

The key to making this technique effective is to make sure that every single person your dog meets uses it every single time that your dog starts to jump. Houseguests might say that they don’t mind.

Some members of the family might want to roughhouse or dance with the dog. You can’t afford to have a giant breed dog that is confused about whether jumping up is okay!

Once the dog is calm, be sure to reward them with lots of attention and affection. Use treats to train and reinforce good behavior.

When you have made enough progress training your Great Dane that it will respond to commands like “sit,” “lay down,” or “four on the floor,” you can use these commands to get them to stop jumping.

Use treats and positive reinforcement to drive home the message that they’ll get more of the good stuff they want when they don’t jump up.

When you’re just starting out with training, you might find that you have trouble getting the dog to obey commands when they get over-stimulated.

New people coming into their home, strangers you encounter when you’re out for a walk, even other dogs can cause your Great Dane to become so excited that they stop responding to commands that they instantly obey under normal circumstances.

In order to counteract this tendency, it’s important to gradually expose your dog to more challenging environments while you work with them on basic commands like “sit”, “stay”, and “place“.

If you want your dog to be a welcome part of your local community, you need to make sure that they’re as well-behaved in public as they are at home.

If your dog does become too excited, remove them from the situation that has them worked up. Once they’re calm, try again. Remember to be patient with them as they learn.

Jumping up is a fairly common behavior problem with Great Danes.

Fortunately, there are some specific techniques that you can use to make sure they learn that they get better rewards when they don’t jump than they will if they do!

Take the Fun Out of Jumping

Jumping up only seems like a good idea to your dog when they feel like they’re in control while they’re doing it.

If you respond to the behavior in ways that take the dog’s control away from it, they’ll quickly learn to associate the behavior with a loss of control that they don’t enjoy.

Use the following techniques interchangeably to establish a negative association with jumping.

As we said earlier, the most likely reason that your Great Dane is jumping up is that they want attention and affection. If that’s what they’re after, yelling at them is actually less effective than saying nothing at all.

Instead of providing this verbal feedback, try using some of the silent behaviors described below to discourage your Great Dane from jumping.

In this article, we’ve talked about why it’s so important to discourage jumping in your Great Dane puppy. We’ve also discussed some basic fundamentals that need to be in place to get any training to stick with your dog.

Finally, we talked about some specific steps that you can take to discourage jumping and reward good behavior. Danes are great pets, but they’re so big that it’s important to make sure they know how to behave. Start early, stay consistent, and be persistent. 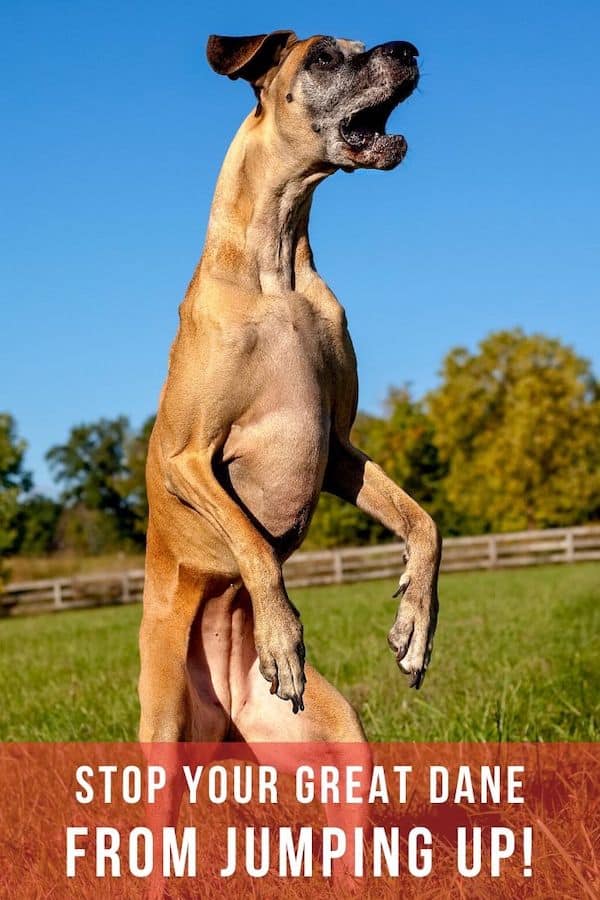 5 thoughts on “How to Stop a Great Dane Jumping Up”