Bloat is the number one fatal health condition affecting Great Danes. Certain studies indicate that their lifetime risk of bloat is as high as 42.4%!

While the condition is not fully preventable, there are a number of tips that you can follow to help prevent their chances of developing this painful and potentially deadly condition.

Your Dane can become critically ill or even pass away within hours of developing bloat, so quickly recognizing its symptoms is absolutely critical!

The term “bloat” is often used interchangeably for two separate but related medical conditions. The first condition, bloat, simply refers to a scenario in which the stomach becomes bloated with gas. While bloat can cause issues in other breeds such as cows, it rarely proves to be problematic for dogs.

The second and far more serious condition occurs when the stomach becomes distended with air and is twisted where the esophagus meets the stomach. The medical name for this condition is Gastric Dilatation-Volvulus or “GDV” for short.

To further muddy the water, GDV is sometimes referred to as “torsion”.

As the stomach fills with gas it can place pressure on the diaphragm and cause difficulty with breathing. Even more concerning, the added pressure can also cut off the return blood supply to the heart and lead to a rupture. This can lead to a state of shock, and even death when not immediately treated.

Due to its fatal nature and the appearance of bloating symptoms, you can now see why the term “bloat” is used to describe both GDV and bloat.

To this day the cause of GDV is not fully understood by veterinarians. Even the sequence of events leading up to the condition remains a mystery. The first possible scenario is that the stomach distention happens first, which then leads to twisting of the stomach.

An alternate version proposes that an initial twist of the stomach causes air to be trapped and later lead to distention.

Regardless of which scenario is correct, it should be understood that bloat can exist on its own with GDV. However, GDV will always exhibit symptoms of bloat.

Great Danes have the highest risk of bloat amongst dogs. Other high-risk breeds include Bloodhound, Irish Wolfhound, Standard Poodle, German Shepherd, Boxer, and Akita. The following factors are thought to increase the risk of developing bloat (GDV).

Note: The above risk factors were derived from a study conducted by Dr. Larry Glickman, an epidemiologist at the Purdue University School of Veterinary Medicine. The study was conducted on canine bloat where he followed over 1,900 dogs to help identify risk factors.

The symptoms of bloat

With your new knowledge of bloat (GDV), you can see why it’s imperative to quickly identify bloat symptoms should they occur. While the condition typically takes several hours to become critical, cases have been reported where a fatality occurred in 20 minutes.

The following symptoms are signs that your Dane may have developed bloat. In the event that these appear, you should immediately take them to your veterinarian or nearest emergency clinic for treatment.

As previously noted, symptoms typically take 1-3 hours to transition from phase 1 to phase 3. However, you should seek immediate care as soon as a case of bloat is suspected.

The first step in diagnosis by your veterinarian will likely involve a brief physical examination and understanding of the dog’s history.

Excessive drooling, enlarged abdomen, and signs of pain are key indicators of bloat. Several blood tests may also be done, however, an X-ray of the abdomen is the fastest and easiest way to diagnose bloat.

If bloat is indeed present, the X-rays will reveal a stomach distended with gas. It may also reveal the displacement of the pylorus, which is further confirmation of GDV.

Because the cause of bloat is still not fully understood, there is no foolproof method for prevention. However, there are certain practices that you can implement to help reduce the chance of its occurrence.

Listed below are some of the surgical and non-surgical options available that are believed to reduce the chances for occurrence.

In addition to the non-surgical approaches, there is also a surgery known as a gastropexy that you may elect to have done. Gastropexy is a surgical procedure where the outside lining of the stomach is attached to the body wall.

While this does not completely prevent the stomach from rotating, it does help limit movement and therefore lowers the risk. Gastropexies should be considered a preventative surgery and not a full-proof approach.

As with all surgical procedures, there are risks to balance with the potential benefits. Complications can arise from anesthesia, the surgery itself, or infection afterward, and are all things to take into consideration.

Some veterinarians are prone to recommend for high-risk breeds like Great Danes while others believe that the risks outweigh the benefits. This is a conversation that you and your family should have with your respective veterinarian to understand their opinion on the topic.

Gastropexies are often performed in conjunction with a spay or neuter to combine operations and limit the chance for complications. However, older animals can also have the surgery performed as a standalone operation.

Developments in laparoscopic surgery have made this approach more common as the technique is minimally invasive, and has faster healing times. This approach is conducted by inserting a camera near the belly button for visual aid during the surgery.

A second insertion is made just inside the right ribcage, where special instruments are used to grasp and attach the stomach to the right side of the body wall. The length of the procedure for both the traditional and laparoscopic version are similar, and in both cases, the animal will typically go home the same day the procedure is performed.

In addition to bloat, there are other conditions that are also unfortunately found more commonly in Great Danes. Take a look at this article to better understand the symptoms of Wobbler’s Syndrome.

For more information about caring for your Great Dane, please consider taking a look at my book “The Great Dane Puppy Handbook“. The Great Dane Puppy Handbook takes all of the need-to-know Great Dane info and packages it together into a single, concise resource. Save yourself time, money, and frustration by avoiding the most common mistakes made by Great Dane owners! 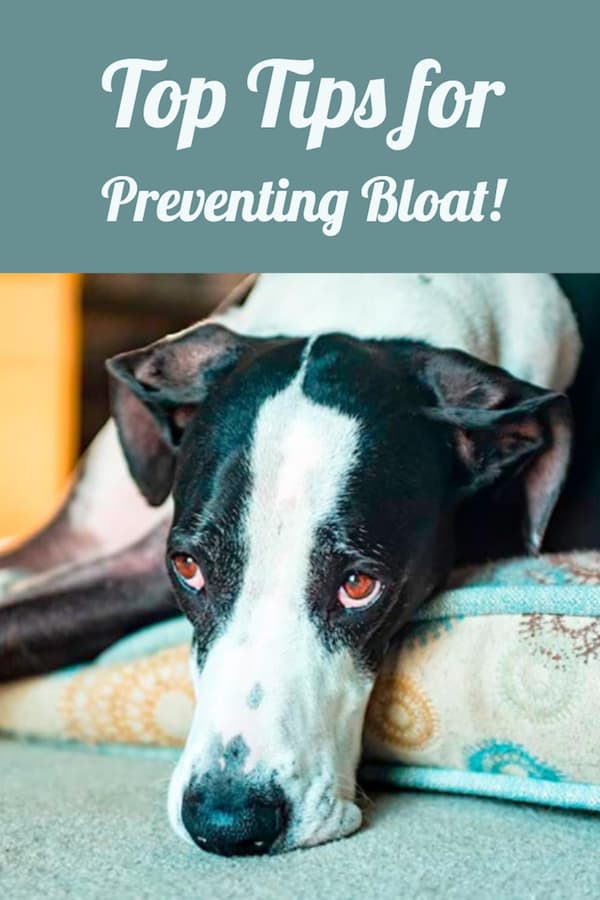 8 thoughts on “How To Recognize, Treat, And Prevent Bloat In Great Danes”