Whether or not you own a Great Dane, there’s a good chance that you’ve heard about the Great Dane Zoomies! But what exactly, are the Zoomies?

The Zoomies are a Great Dane’s way of releasing pent-up energy or excitement. The Zoomies are characterized by short bursts of frantic sprinting, often in circles or figure eights, and potentially even leaping or jumping over objects. This wild display is short lived and usually only lasts 1-2 minutes.

Entertaining as this may seem, there are a few things to take into consideration when it comes to Great Dane Zoomies.

Considerations for Zoomies with Great Danes

Energy from being pent-up, excited, or even nervous builds until the point at which it simply needs to be released. Resulting in what we affectionately refer to as the “Zoomies”.

If you’re able to witness them in person, they may seem a bit crazed in the act but I can assure you that they’re having a blast.

Much like kids might run wildly around a playground in excitement, this is one of the few scenarios in which Danes break out of their otherwise cool and calm demeanors.

It’s not uncommon to even see a Dane trip over their own feet, or flop to the ground mid turn as they begin to tire.

If you’re still not sure exactly what the Zoomies look like, here’s a short clip to show you what they look like in action!

While having a little fun and releasing energy is a good thing, it doesn’t come without its consequences. Because of a Dane’s large size, Zoomies inside the house are typically a bad thing!

A Great Dane could very easily damage furniture, break doors, and even accidentally injure themselves or others.

These sprinting fits are borderline out of control, so it’s not as if they intend to do damage – just that some might occur on accident.

For your safety and theirs, it’s best to teach them that Zoomies are only allowed outside the house. As seen in the video above, imagine your Great Dane trying to sprint at full speed and then turn or stop on in a dime inside the house to avoid colliding with obstacles.

I can assure you that it’s not going to work out well!

Even when allowing the Zoomies outside, make sure to keep your guard up while watching them sprint around. Whether it be your backyard, the park, or an open space, they often enjoy sprinting close to you.

If the ground is wet or slick, they could very well slip and come sliding into your legs. Keep on eye on children during this time as well to avoid them from being accidentally knocked over as well.

In addition to appropriate places for the Zoomies, there is also the consideration of when they should be allowed. While the data is still inconclusive, there is a large contingent that believes that strenuous exercise after eating is a contributing factor to bloat (GDV).

Given that bloat is the number one killer of Great Danes, this certainly seems like a worthwhile thing to consider. It may not be conclusive yet, but to me it seems worthwhile to stop the Zoomies if they start up shortly after meal time.

The general recommendation is to wait one hour after meals.

For more detailed information about bloat, you can read more about it in our dedicated article here.

In addition to meal times, you should also take care to prevent the Zoomies after your Great Dane is recovering from common surgical procedures such as a spay, neuter, or gastroplexy.

Wild sprinting at this time would greatly risk the re-opening of surgical sutures, staples, and other implements.

Do Great Danes grow out of the Zoomies?

Generally speaking, Great Danes of all ages will engage in the Zoomies! Granted, these fits of exuberance may occur less frequently as they age, but they’re certainly not limited to puppyhood alone.

Great Danes reach physical maturity around the age of two, and it’s around this time that you may also notice a drop in their energy. When this happens, it’s often the case that you’ll see fewer cases of the Zoomies as well.

Unless they’re showing other signs of illness, this is nothing that should cause concern as they simply no longer have the surplus of energy that they once had as a puppy.

Aside from drops in energy, you may also notice older Great Danes greatly slow down when it comes to the Zoomies, or may even completely stop together at a certain point.

I’ve come across no shortage of Great Danes who still stick to their Zoomie ways even up until the ages of 8 and 9, so it’s not something that most “grow” out of of.

The bigger limiting factor for older Great Danes will be the potential onset of limiting factors such as arthritis or orthopedic issues that limit their mobility. In these cases, it’s sadly for the best that Great Danes avoid this raucous spurts of activity.

What if my Great Dane doesn’t do the Zoomies?

While the Zoomies are common for Great Dane’s, it is not a guarantee that all Great Danes will do them. However, a lack of the Zoomies doesn’t mean that something’s necessarily wrong.

It could very well be that it’s simply not in your particular Great Dane’s nature or personality. They may also simply just not have the surplus of energy the typically necessitates the Zoomies.

Given that Great Dane’s are a notoriously lazy breed, this is completely within reason.

Now – if you Great Dane is normally a Zoomie-fiend and all the sudden stops them completely, that would be a completely different story. In that scenario, they very well could have an orthopedic issue or some other ailment that’s preventing them from wanting to run around.

If this is the case, you may want to have them checked out by a veterinarian to make sure that there’s nothing wrong with them.

Do Other Dog Breeds do the Zoomies as Well?

Yes, Great Dane’s aren’t the only breed who participate in the Zoomies! While you may not have noticed it as much, almost all breeds experience this random bursts of energy that are released with a few minutes of frantically sprinting around.

My parent’s Bichon Frise (Charlie) was a notorious Zoomie machine! For what ever reason, she would often do them in the evenings and have a ball running around the house like a wild animal!

Typically, this even included going up and over the couches and back and forth in circles through the kitchen or living room until she wore out. Lucky for us, at a mere 14 pounds, she didn’t have the size to cause any damage in the process.

The key difference really boils down to size. It’s almost impossible to miss a 130+ pound dog sprinting around in circles! Couple that size with their goofy nature, and it makes for quite the entertaining show for any bystanders.

In addition to the entertainment value, many witnessing the Great Dane Zoomies are quick to pay attention out of concern for being run over 😉 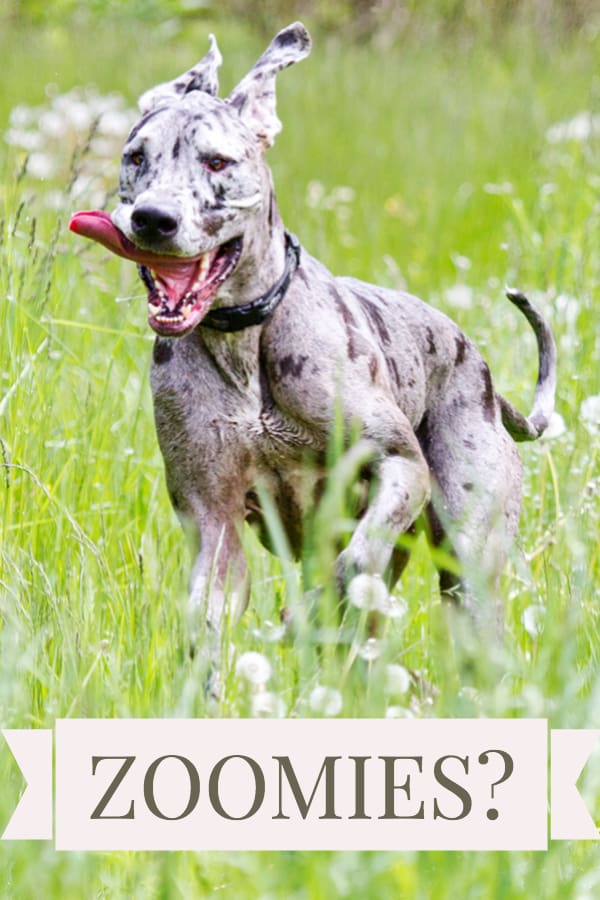 1 thought on “What are Great Dane zoomies?”