When looking for a new dog, nobody wants the dumbest breed on the market, but how exactly do you measure a dog’s intellect? If you are considering a Great Dane, or want to know more about the breed, you are probably wondering, are Great Danes Smart?

Great Danes make lovely watchdogs and are affectionately referred to as gentle giants. They are great with children and are average to train.

However, the Great Dane is typically not a breed for a first-time dog owner. Having the experience of caring for and training a smaller breed is helpful before jumping into the foray of training a giant breed such as Great Danes.

How Smart Are Great Danes?

However, Great Danes do show excellent skills in response to their adaptive intellect – the ability to problem-solve. Great Danes can make for excellent guard dogs and can distinguish between an intruder and a friendly visitor such as the Gardner. When unsure, they will even bark to alert others until they are able to distinguish whether the individual poses a threat or not.

Great Danes also have above-average instinctual intellect and thanks to their large physical size, have the ability to perform an impressive number of other physical feats as well.

The Great Dane is also a very social breed, known as the gentle giants of the dog world. They are strong, yet gentle, intimidating, yet kind.

Here are some of the Great Dane’s best traits:

In Dr. Stanley Coren’s book “ The Intelligence of Dogs,”; Dr. Coren ranks the Great Dane number 44 on the list of 208 dog breeds. Dr. Coren points out in a story during the first chapter of the book that his dog penny had taken an object of pain and hidden it so that it could not be used again on her.

Dr. Coren goes on to explain how it takes intelligence to think of the possibilities resulting from an object that could cause some harm.  This scenario shows the result that adaptive intelligence is present in all dog breeds.

With no measurement system available to measure adaptive intelligence and then to adjust for instinctual intellect from the equation, there is no sure way to measure our furry friends’ IQ levels.

What Dr. Coren managed to accomplish was to rank each dog breed by obedience intelligence, and while the work of Dr. Coren is highly respected; It fails to take into consideration some of the most critical factors involved in measuring intellect.

The term adaptive intelligence refers to the animal’s ability to problem solve outside of the ordinary “yes” or “no” situations. Solving puzzles, figuring out how to get their head unstuck from a bucket. The great Dane has a highly developed form of adaptive intelligence.

Coren explains that adaptive intelligence is different from the other intellectual factors of the canine species.  Adaptive intellect in dogs is learned from observing, and Coren also reveals that a dog has the mental intelligence of a toddler.

The breed does affect the dog’s ability to learn, as well as their intelligence level through observation. Adaptive intelligence is what makes the dog come running into the kitchen when you open a cheese wrapper or can of peanut butter 😉

Coren’s test does take into consideration measurements for a breeds adaptive or instinctual intelligence abilities.

Obedience is the area where the Great Dane showed an average rating. If this is what we are using to judge the breed on their intellect, they ranked 44 (of 208). The Great Dane showed that they could follow directions from an already trained behavior at least 51% of the time, on the first command.

The obedience intelligence factor is only one factor to consider; the other measurements in the test included how many times it took the breed to learn a new behavior. The Great Dane took an average amount of times coming in at 25- 40 times.

The other dogs that ranked in the same category of “IQ” are the Boxer, Siberian Husky, Australian Sheppard, and Dachshund.  Three of which are also in the working group of dogs classified by the Americal Kennel Club!

The dogs that ranked the highest in Dr. Coren’s study were some of the most popular dogs in America. This result could only be a correlation between obedience and likability with the relationship between humans and dogs.

I am not saying that the top 10 don’t deserve their ranking, but the scale is a little off for measuring the full intellectual capability of the entire canine race.

Regardless of intelligence, the Great Dane is clearly a fantastic dog breed. Their friendly, patient and dependable nature make them fantastic companions.

This breed is an excellent watchdog and is very alert.  As kind as they are, no intruder is going to get past this breed.

They are also good hunting dogs, sometimes being able even to point you in the direction of an unsuspecting buck. Great Danes were bred originally to hunt wild boar, and they are good at it! Fortunately (or unfortunately, depending on how you look at it) their boar hunting days are well past them for most Danes these days.

The Great Dane is agreeable to a point, but they can also be stubborn at times. If you don’t have a good connection with your Great Dane, then they typically will not listen to you very well. It does take a lot to manage these giants.

Great Danes are fun and quirky with a hint (or more at times) of goofy! While they generally have low to moderate energy levels, they are prone to occasional cases of the zoomies.

Watching them run around frantically for a minute or so before passing out for a multi-hour nap is not uncommon.

Dr. Coren has done a great job on the research for his book “The Intelligence of Dogs,” a book that has been used as a reference whenever questions about canine intelligence, since its first release in 1996.

In the comparison of the top three dogs that Dr. Coren ranked based on obedience, two of the top 3 are some of America’s Favorite breeds.

Dr. Coren also ranked several dog breeds in some categories based on his test results due to ties or constants in his lab work.  Some dogs were rated mostly based on the ability to obey commands and learn new tricks.

When looking into the breed classes of dogs, we also noticed that two of the top three were in the herding group of dogs. These dogs are naturally inclined to herd animals for humankind, which takes a little bit of intellect to get the livestock where you want them to go.

It is a tough task to measure the IQ of an animal that can’t take a test, or find an average. The Great Dane dog breed is showing average intelligence when it comes to following orders.

Note: The “America’s Favorite Breed” ranking only covered the top 10 breeds. Because neither the Great Dane or Border Collie made the top 10, we were unable to provide an accurate number.

The other breeds in the working class of dog breeds are excellent at performing tasks that require a little bit of adaptive intelligence.

The Great Dane is agreeable when it comes to training, as it can take up to 40 times of repeating a task before they understand.

The working group must adapt to changing conditions and learn to make choices based on the circumstances that present themselves, which takes some intellect higher than obedience training alone.

Two of the top three intelligent dogs were herding dogs, specifically with the ability to herd large groups of animals. Surprisingly, the Great Dane was not ranked in the top ten most intelligent dogs.

However, some of its co-breeds were.

The Importance of Socialization

Socialization and obedience training is the most critical aspect of owning a Great Dane. Getting them from puppyhood and having them socialized at a young age is essential to maintaining a healthy relationship with your dog.

The average Great Dane can easily be over 30 inches tall and can weigh well over one hundred pounds.

Begin socializing the dog immediately after adopting it if it is older than six months old.

Some things that you can do:

Social intelligence is being able to pick up on cues from other animals or other people. Social intellect is measured primarily in humans, and dogs are not usually considered.

The fact that Great Danes can pick up on the social cues of other animals makes them smart in a social sense.

The German Sheppard is a great dog, and they can be loyal companions and very social, but when it comes to being around smaller children or even smaller dogs, you must be careful.

By comparison, most Great Danes are more gentle than the German Sheppard in social situations.

The Border Collie is considered America’s smartest dog; one of the reasons for that is that the breeding standards are different.

This dog is explicitly bred for abilities rather than looks, or coat colors. Once trained, you can send the dog to herd the animals.

The Border Collie has a larger heart than most dogs of similar size, making this breed a better athlete than the Great Dane. The Border Collie understands better than some other dogs what to do when given commands.

The Border Collie makes an excellent herding dog because of its ability to adapt to all kinds of situations. The Border Collie will quickly go wide when trying to herd cattle and is easier to train than other breeds such as the Great Dane.

Check out this cool video below that’s all about the Border Collie.

The Great Dane is an excellent guard dog, and it can distinguish between a threat and a playful target. Check out this video of a Great Dane who went from playing with the house cat straight to protection mode.

The Great Dane can complement any security system that the family has already installed.

The Great Dane shows intelligence with different things that are important to us as people. A Border Collie is not a great guard dog, but the Great Dane is an excellent guard dog.

A Great Dane is a horrible herding dog, but a Border Collie is the best herding dog.

Even though Great Danes are extremely large, they do not require extensive exercise to stay in shape or be happy. The Great Dane also is relatively easy to train.

Picking a new companion for your home is always a challenge, and I tend to go with the dog that matches my personality better. We co-exist on this planet, and the dog does not merely exist to serve humanity.

When choosing a new dog for your home, you should always find a dog that matches your personality. Otherwise, you are going to become frustrated with the dog, and this can lead to a bad experience with your new roommate.

Unless you have very specific reasons for wanting the “smartest” dog, then you may want to re-evaluate why it’s in your list at all. 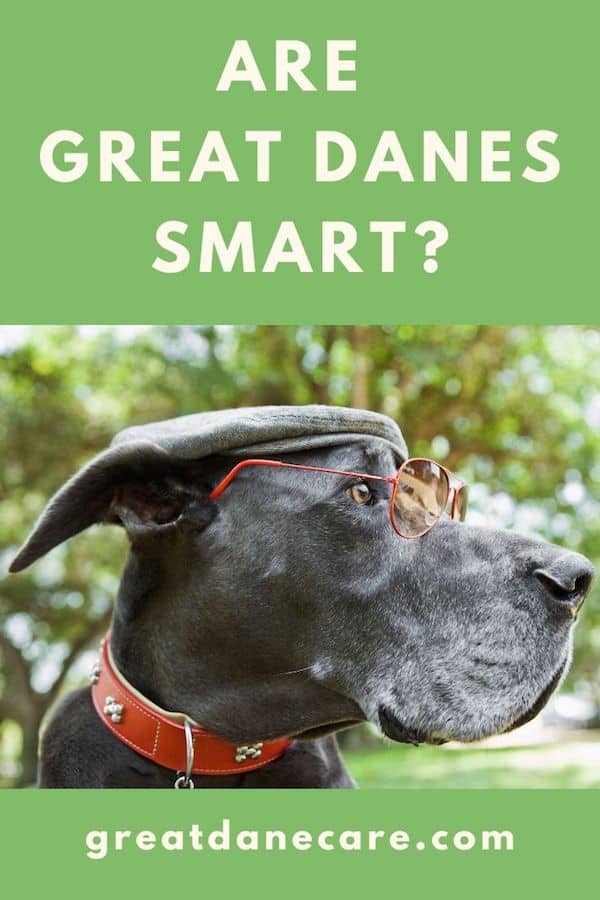