Unlike straightforward color coat names such as black and white, you may wonder exactly what a harlequin Great Dane is! While the name may sound confusing, harlequin is actually a very easy coat color to identify.

A harlequin Great Dane has a white base color coat with irregular shaped black patches evenly distributed across the body. It is one of the seven officially recognized Great Dane colors, and Great Danes with a harlequin coat are sometimes mistaken for Dalmatians due to the coat similarity.

Using this simple description, you can now easily identify a harlequin Great Dane! However, there are a few additional nuances in the official AKC breed standard.

I’ll also review some of the most commonly asked questions about harlequin Great Danes.

In addition to the white base coat with black torn patches, there are a few additional marking preferences/notes defined in the breed standard.

Some of these are considered requirements for the dog to fall into the harlequin classification for show, while others are simply listed as preferable.

As you can see, there is a lot of room for variation in the harlequin coat!

While breeders should take certain steps to avoid breeding mismarked harlequins, there’s still no guarantee that even the most careful of breedings will not result in litters will not produce at least some puppies with mismarkings.

For owners, these marking guidelines are really only relevant if you intend to show the dog. If your only interest is in finding a fantastic family pet, then you have little need to worry over the specific nature of these markings.

You will be much better served by picking a dog whose personality is a good fit instead of selecting one based on a particular “look”.

While some harlequin Great Danes may look similar, no two will have identical coats. This can make for a fun sense of pride and appreciation for your “extra” unique Great Dane 😉

What is the difference between a Harlequin and a Merle Great Dane?

On top of this gray coat, they will also have sections of torn black patches.

Other common markings of a merle Great Dane include:

While these two coats are similar, the difference in base coat color makes them fairly easy to tell them apart. Given this close appearance, it shouldn’t come as a surprise that their coat color genetics are also very close.

However, because the topic of color coat genetics is complex, I’d recommend taking a look at this article from doggenetics.co.uk for a more in-depth read into it if you’re interested.

Yes, harlequin Great Dane puppies are born with spots! However, these spots may change shape, shift around, and even grow as the dog gets older.

Given that Great Dane puppies typically weight 1-2 pounds and are well over a 100 pounds as adults, that’s a lot of growth to account for and should come as no surprise that the spots change.

You can expect their coat to “finalize” once they reach adulthood. This usually happens around the 2-3 year mark for most Great Danes.

However, there are also reports of coats changing as late as 5+ years, so don’t let it concern you if this does end up being the case for your dog.

In addition to the changes in their spots, you may also see a change in their nose color. Many puppies initially have a cute pink nose that turns to black as they grow older.

Even two perfectly marked and healthy harlequins cannot, or rather should not, be bred due to the risk of a resulting double merle gene.

Because each harlequin carries the merle gene, it’s almost guaranteed that some of the pups from the litter will have the double merle gene.

Why does having the double merle gene matter?

Sadly, while many double merles do not survive to birth, those that are born are commonly blind and/or deaf. Each puppy in the litter bred from two harlequins has a 25% chance of carrying the double merle gene.

For easy math – that means a litter of 8 puppies would likely result in 2 with the double merle gene. One would likely not survive to birth, while the other would likely be born severely impaired.

While two harlequins should not be bred together, there are other acceptable approaches to breeding/producing harlequins that have far less risk.

Below are a few examples of approaches that are commonly taken to safely producing litters containing harlequin puppies, or dogs whose coats resemble that of a harlequin.

Note: some of these combinations are more likely to produced mismarked harlequins than others.

How much is a harlequin Great Dane?

Shelter adoption fees vary by region, but you can expect to pay somewhere in the $300 – $400 range for a puppy. Older dogs usually cost a little less.

If you are purchasing the harlequin from a breeder than the fees will likely be much higher than a shelter adoption. This will vary breeder by breeder, but generally you can expect to pay between $1,800 – $3,000.

For a given breeder, you may find that their harlequin puppies are slightly more expensive than other colors. I say “slightly” because if you’re already considering paying ~$2,000 for a dog, then an additional few hundred probably isn’t a deal-breaker but it is worth noting.

The reason for this increase is that the breeding of harlequins requires an even more methodical approach than normal. Because their markings are so varied, it can be difficult to find dogs that meet both the health and marking requirements.

While mismarked dogs can be bred, most breeders seek to breed those who best exemplify the breed standard.

Merlequins look very similar to that of a harlequin coat, with the exception of the color of their black patches. These patches are instead replaced by patches of merle i.e. blue with black dots.

Because the appearance takes on the blend of a harlequin and merle coat, the name “merlequin” is used to describe it. 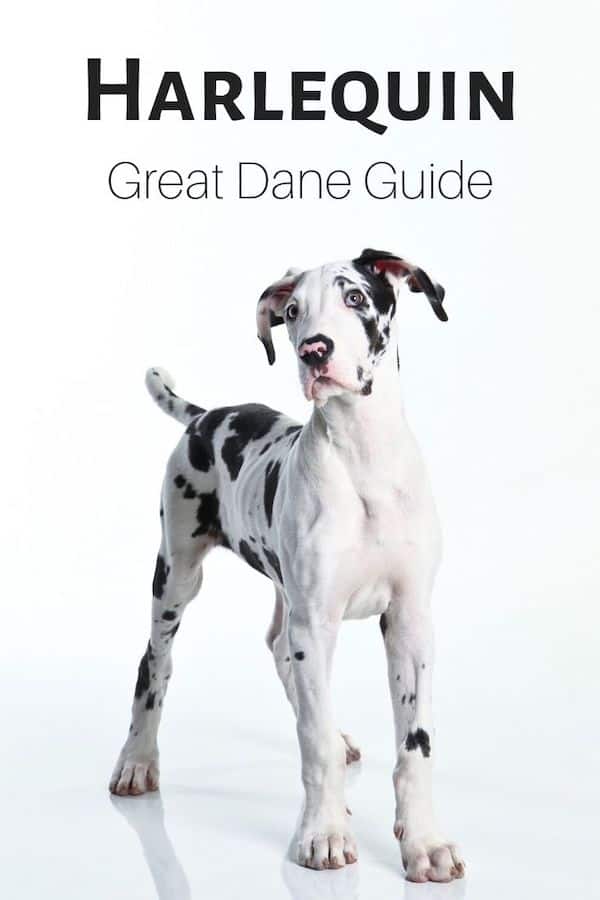 2 thoughts on “What Is A Harlequin Great Dane? A Guide To This Beautiful Coat!”