If you’ve ever heard the primal sound of a dog’s howl, you’ll find yourself quickly wondering exactly why a Great Dane might howl. Since howling is often associated with wolves and hound dogs, it’s reasonable to find it strange that your gentle giant is a howler too!

Howling is one of the oldest forms of communication for dogs and is found in most dog breeds, including Great Danes. It can signal a variety of things including but not limited to anxiety, injury, or sickness, alerting others, and seeking attention.

While howling is clearly a form of communication, it can often mean different things under different circumstances. Since none of us speak “dog”, let’s take a look at some of these reasons why your Great Dane might be howling!

Just in case you think I’m crazy and don’t believe that Great Danes are “howlers”, here’s a quick video of Gus testing out his howling vocal cords!

Now that we’ve got the proof out of the way, let’s jump in and take a look at a few of the reasons why a Great Dane might howl. Keep mind that they could be howling due to a combination of factors, and not a single reason.

Given their social nature, Great Dane’s are prone to developing anxiety. Just listening to the sound of a howl, you can imagine a Great Dane letting our a long sorrowful howl as they wish for companionship!

Amongst other vocal choices, howling is certainly one way for them to let others know that they’d like some friends, be they human or canine, to come to spend some time with them. While I’d never wish a Great Dane to feel lonely, howling is probably a better option than barking when it comes to not disturbing your neighbors!

It’s also a far better option for them to “let out” their feelings through howling then deal with the aftermath of anxiety-driven destructive behavior.

In addition to conveying feelings of loneliness, howling may be your Great Dane’s way of conveying that they’re not feeling well or injured. Similar to a moan, it’s a deep soulful sound that very well could be let out when they’re not doing well.

If you suspect that this might be the case, try to look for other signs such as diarrhea, personality changes, not eating their food, or vomiting. These are clear indicators that the howling is probably related to the illness or injury that has befallen them.

In the event that it continues for an extended period of time, your best option will be to contact your veterinarian to help get to the bottom of it before things get worse. It’s always better to be safe than sorry in these types of situations.

Knowing that howling is an ancient form of communication, it makes sense that it’s also used to alert others. In the wild, this low resonance sound has the ability to be heard from miles away!

Therefore, making it an extremely effective tool for a Great Dane to alert their pack of impending danger or event to take notice of.

While many Great Danes aren’t the best guard dogs, most are decent watchdogs. And the howl plays perfectly into alerting those around them.

As you may have noticed from the video of Gus howling, he wanted to follow along only once he heard the other animal howling! It’s such an instinctual, pack-driven action that many are compelled to howl once they hear another doing it.

Ever hear the phrase “going along with the pack”? Well, that’s exactly what’s happening in this scenario!

Your Great Dane may actually have no idea why they’re howling, but because they heard others howling they just go along with it. It’s proof once again just how instinctual the act of howling is for our adorable gentle giants.

Last but not least, let’s not forget that Great Danes are an incredibly social dog breed. It is extremely common for them to be vocal and exhibit a wide variety of non-barking sounds to communicate with others.

With howling being one of the oldest canine sounds around, why not put it to good use as well?

If they’re not getting what they want through normal sounds and actions, a howl could be a great way to try and get someone’s attention! It could be used as the dog equivalent of “hey mom and dad, look at me!”

Many Great Danes are also people-pleasers, and could just be trying to get a kick out of the crowd by showing off their impromptu howling act 😉

Should You Be Concerned If Your Great Dane Is Howling?

Generally speaking, howling is not something that should be a cause for major concern. Howling is an extremely common way for Great Danes and other dog breeds to communicate.

Of course, the one major caveat here is that you don’t think that they are sick or injured. In those cases, howling would quite literally be their cry for help! When in doubt, the best option will always be to contact your veterinarian if you’re worried that this might be the case.

You’ll need to pay close attention to the situation and other circumstances during which they howl to help figure out its source, or what it is that they’re trying to communicate to you.

Don’t forget that because Great Danes are often quite vocal, it could just be their way of being silly or talking!

Why Do Great Danes Howl More At Night?

Great Danes are notorious for becoming more territorial and defensive of their home at night.

Because of this, they will often resort to howling as a way to:

So while it might be annoying at times, just know that their howling antics are likely because they simply want to protect their loved ones.

Granted, there may also be occasions where they’re just going along with others, but generally, it’s because they want to protect their family.

Conclusion On Why Great Danes Howl

As you can see, howling is far from uncommon practice for any dog – including Great Danes. However, figuring out exactly what’s causing them to howl can vary depending on the situation.

To figure out the exact reason (or reasons) in your case, you’ll need to study the situations in which they howl most often and try to determine the most likely cause.

While certain situations may require medical attention, most are rooted in other behavioral sources. 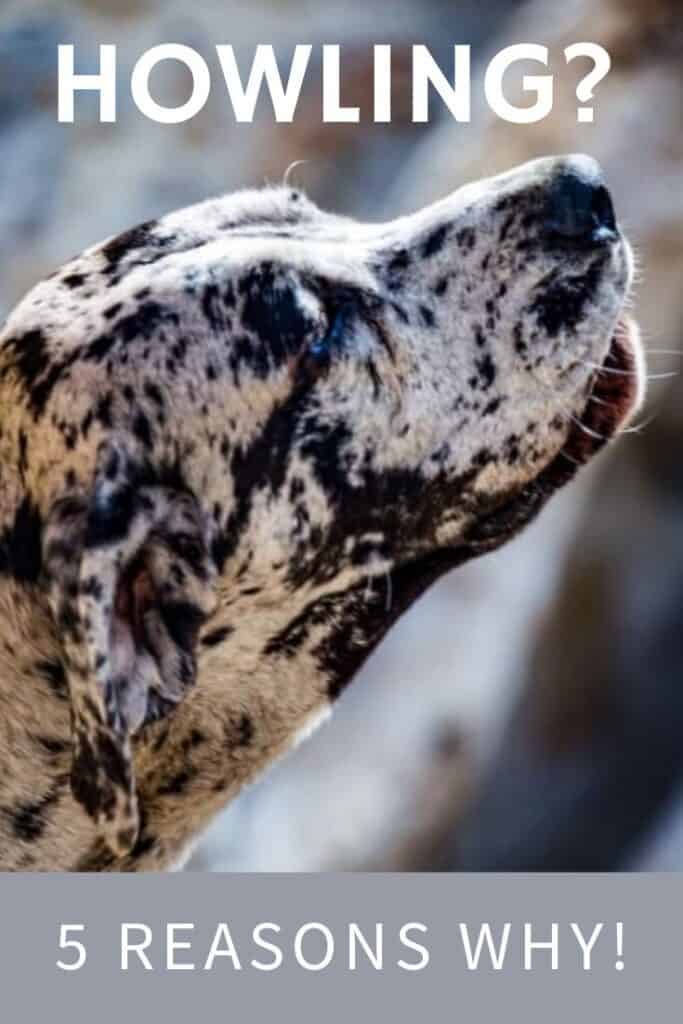