Great Danes are one of the world’s most recognizable dog breeds. While many are familiar with their large size and penchant for drooling, there are many more interesting things to know about Great Danes.

1. Great Danes are not Danish!

Although their names may indicate otherwise, Great Danes are not from Denmark.

The breed originated from Germany, leading us to the second fun fact 😉

2. They are the national dog of Germany

Great Danes were named the national dog of Germany in 1876.

Germany went as far as to ban all other names, and dictated that the sole name was “Deutsche dogge”!

3. They were originally used for boar hunting

Once their boar hunting days were behind them they transitioned to companion pets.

4. Ear cropping is a holdover from their days as boar hunters

Great Dane’s ears were cropped to limit physical harm during boar hunts. Boar tusks were prone to cutting their ears when left uncropped, leading to loss of blood and sometimes death.

In today’s world, ear cropping is purely a cosmetic surgery and has no functional use. Although most show dogs continue to have their ears cropped due to the traditional look, many countries have actually banned ear cropping.

If you’re curios to learn more about this topic, here’s a link to an entire article on ear cropping.

Massive paws are one of the most distinguishable features of Great Danes.

When fully splayed, a Great Dane paw can be the size of an average man’s hand.

6. There are 7 official Great Dane colors

You can learn more about them here!

7. Their nicknames include “Apollo of dogs” and “Gentle Giant”

In keeping with their nickname “Gentle Giant”, Great Danes crave attention and often think that they are lapdogs. Their kind nature makes them fantastic family pets.

While most dogs sleep an average of 14 hours per day, Great Danes beat them by a couple of hours. This mastery of sleeping has earned them the designation as one of the laziest dog breeds.

For more information around how much you can expect a Great Dane puppy to sleep, make sure to take a look at my article here.

10. AKC classifies Great Danes as part of the Working Group

Although very lazy, their historical use as boar hunters and sturdy build lead them to be classified as part of the working group. While most Great Dane’s these days are companion pets, some have stuck to their working roots acting as service animals.

Their large frames make them well suited to physically assisting those with disabilities.

Tip: If you’d like to learn more about this topic, the Service Dog Project is dedicated to training and donating Great Danes to assist those with mobility limitations.

While this may not seem like a lot at first glance, take into consideration the birth weight for other dogs. Small and medium size breeds at birth typically weight between 0.15 pounds – 0.6 pounds.

As you’ll find out in #14, Great Dane’s birth weight is a far cry from what they will weight as fully grown adults!

Lucky for us, their daily food intake goes down once they are done growing. Adults often eat less than the fast-growing puppy versions.

Read more here for reference on how much to feed a Great Dane puppy.

While many Great Danes are done “growing” at the age of two, it usually takes until the age of three for them to fill out their large frames.

By comparison, most small breeds are fully done growing around the one year mark.

14. They’re bigger than they look!

These of course are just averages, as you can also come across male Great Danes pushing the 200 pound mark. Zeus mentioned in #7, weighed in at a whopping 228 pounds!

Ask anyone who’s had a Great Dane lean on them and they’ll tell you that they’re much bigger than you realize!

Due to their extremely fast growth rate, Great Dane puppies should avoid hard exercise as it can lead to joint and bone damage that would impair them later in life.

For more information about appropriate forms of exercise for Great Danes, make sure to take a look at my full article.

16. The University of Iowa once had a Great Dane as their mascot

Before the selection of the Hawkeye as the official mascot, two Great Danes served as the school’s mascot from 1927 – 1935.

17. Great Danes are the official state dog of Pennsylvania

Pennsylvania established Great Danes as their official state breed in 1965. They were the second state to make an official designation for the state breed.

Maryland holds the record as the first to declare a state dog in 1964. Not surprisingly, their choice was the Chesapeake Bay Retriever.

Although Pennsylvania has declared them the official state dog, the most popular state for Great Danes is actually West Virginia! More details on the popularity of Great Danes in the United States by state can be found here.

The greatest tragedy of owning a Great Dane is their comparatively short lifespan. What they lack in lifespan, they do make up for in love  Although not formally documented, the oldest Great Dane I was able to locate lived to the age of 15!

While that may not seem like a lot compared to smaller breeds, consider that it’s twice as long as the low end of their average life expectancy. For more information, make sure to take a look at our dedicated article on Great Dane life expectancy.

19. Bloat, or gastric dilatation-volvulus (GDV), is the number-one killer of Great Danes

This is a sad, yet a very serious topic for Great Danes. We have dedicated an entire article to covering it, learn more about bloat (GDV) by reading here.

Surprisingly, the ultimate cause of GDV is still not fully understood. As a result, there are no definitive cures or methods for prevention.

20. Scooby-Doo and Marmaduke are two of the best-known dogs from television.

Both of which are Great Danes!

It’s rare that we take our Great Dane (Gus) out in public and don’t overhear a young child emphatically telling their parents “Hey, it’s Marmaduke!!!”

An occasional bath or brushing is all that is needed to maintain a Great Dane’s coat. 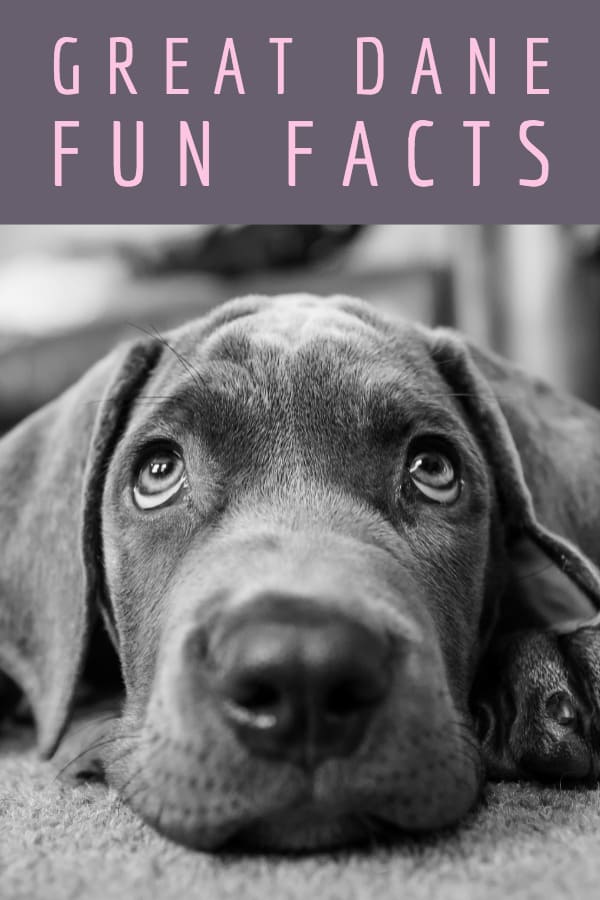 4 thoughts on “21 Things to Know About Great Danes”